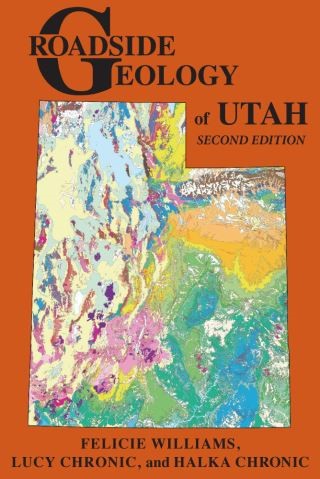 Arches National Park. Bryce Canyon. Zion. When one thinks of Utah, it’s rocks and iconic landforms—preserved in a nearly endless list of national parks and monuments—come immediately to mind. Perhaps more so than any other state, Utah is built for geologic exploration, and geologists/authors Felicie Williams, Lucy Chronic, and Halka Chronic are its expert tour guides.
The Beehive State is splitting at the seams with wondrous geological contrast. Utah’s high mountains, showcasing the results of what happens as the Earth bends, folds, and breaks itself apart, run like a backbone down the center of the state. To the east, the Colorado Plateau’s flat-lying sedimentary rock is wondrously exposed in canyons, arches, and breaks. To the west is the immense Great Basin, a region characterized by rank upon rank of long, narrow, gaunt mountain ranges alternating with desert basins that are among the flattest surfaces on Earth.
Roadside Geology of Utah’s 65 road guides traverse the state’s major thoroughfares as well as its dusty, sleepy, winding two-lane highways. With fresh prose and more than 300 color photos, maps, and figures to boot, you too will become expert at reading Utah’s rocks.